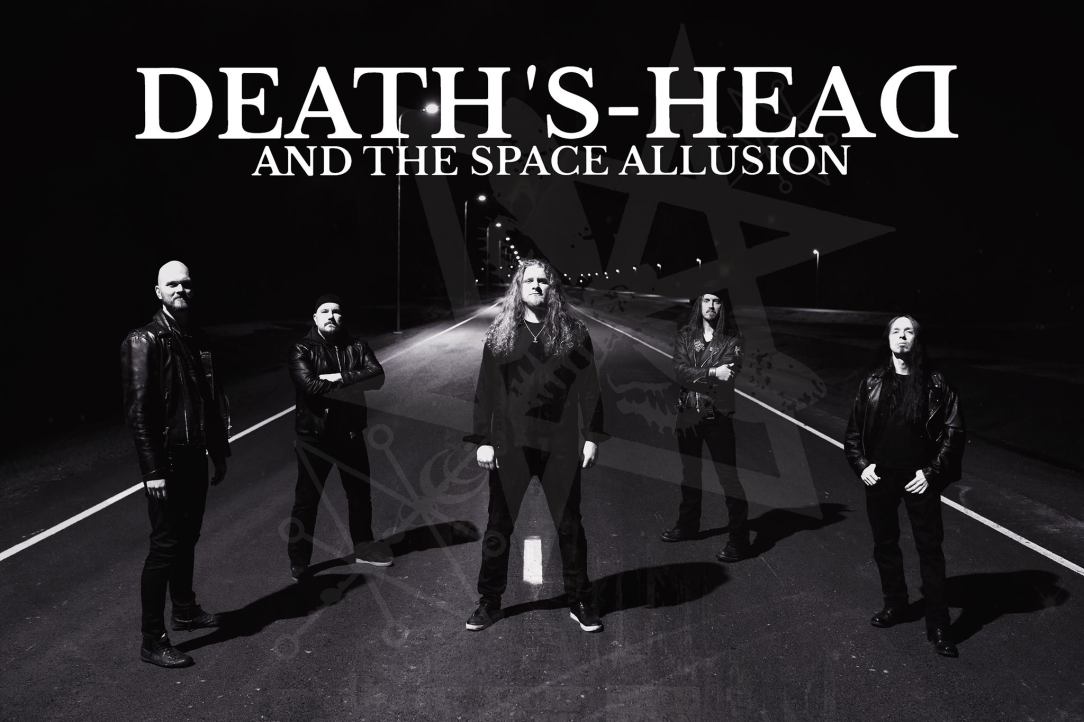 Interview with Antza Talala: Death’s-Head and the Space Allusion in 2020

Finnish hard rockers Death’s-Head and the Space Allusion- DHATSA for short- have announced that they’ve finished recording drums on their upcoming sophomore album. The band, including Valtteri Virolainen (vocals), Antza Talala (guitars), Juho Rikberg (bass), Jussi Ontero (drums), and Hemma Timonen (guitars), used months of quarantine to their creative advantage and continue to march towards the album’s completion, a follow-up from 2019’s The Counterbalance (Inverse Records).

In an interview with Metal Solstice, Talala discussed DHATSA’s creative process, the story behind one of the longest band names in heavy music, and the making of 2019’s “Shrouded Stars” music video, which was recently nominated in the Oulu Music Video Festival.

Metal Solstice: Not to start on a grim topic, but the spring and summer shows were canceled, including Pori Fuzz which DHATSA was scheduled to play. Since we couldn’t witness it live, can you explain what a DHATSA show is like? What had you planned for these events?

Antza Talala: Yeah, when the Covid virus started spreading into Europe, all the shows and gigs were cancelled. I really hope this situation will change us, all people, in some good direction as well. I really hope people learn something from this whole state of emergency. Like redefining what is important in their lives and what we really need and will continue to take better care of loved ones. Hopefully after all this we will get back to some new normal.

We, like many other bands, had to cancel a few shows, and the whole Finnish Fuzz Festivals event was canceled by the organizer- which was, of course, the right decision. We rehearsed hard for these gigs, including a couple cover songs and our debut album almost entirely. Cover songs were supposed to be a little surprise for the audience, so I still won’t reveal them! But when we get on stage, DHATSA always gets the good interaction with the audience. And when you have fun then the audience has fun too, and that’s the great thing!

MS: Do you have any plans for broader touring, once more restrictions are lifted? How have you been working to reach new audiences in the meantime?

Talala: Absolutely! We would love to do a few gigs in southern Finland, and at least one show here in our hometown Oulu before our new album. When we played an album release show here in Oulu, the whole club was full of people. Since then so many people have asked, “When you will play the next gig?” It seems that people would really like to see us play live. And demand must be met!

Of course, we’re updating our social media pages so that people will not completely forget us during this period. At least people can focus at home, listening to our album and finding some new bits there.

MS: Are you collaborating remotely during quarantine? What can you share about your progress on any new material, including a second full album?

Talala: Yeah, we had remote meetings with our band and discussed a lot about the upcoming album and its production and time schedules. A small funny coincidence was that I got ready all the rest of the songs for the upcoming album now during Corona lockdown, so I got to compose and be a nerd wizard in all peace!

I hope that in 2021, people will have our new second album. I have to mention that the new songs will blow your mind! We are so excited to get this album done.

MS: Similarly, what else can you explain about your vision for the band’s future?

Talala: The music industry has changed a lot and is in the grip of change all the time now. We make music that may not get on radio playlists, but hopefully we’ll get to play many more gigs. From the beginning I have had one big wish, that as many people as possible had the opportunity to listen to our songs and records. After that they can decide for themselves whether they like it or not.

MS: “Shrouded Stars” at the end of 2019 was DHATSA’s first opportunity to make a music video. Could you explain the process of creating the video, and any lessons you learned?

Talala: Making the “Shrouded Stars” music video was so fun and great! Acke Salo and Samu Saukko from Lentoi Films brainstormed the whole idea for the video. We had helmet cameras in use, and they were quite damn heavy! But it was really fun to put a heavy helmet on and try to swing and mosh with the music. I had to be careful not to snap my neck or fly back on the floor. It would have been an all-time music video if that had happened! [Laughs.]

The song is rocking, and a kind of “intermediate work” for us; it was a prelude to our second album, although not exactly in the same direction as the newer material.

MS: I’ve looked for one, but haven’t found a clear explanation about how you came up with the band’s name. Care to share?

Talala: Yeah, of course! Great question! Long band name, long answer. I personally have always liked long band names such as Church of The Cosmic Skull, Uncle Acid And The Deadbeats, Elvis Costello And The Roots, and so on. There’s something mystical about long band names and I also listen to a lot of 70’s music myself, so I wanted a long name for my own band. Some of my friends had negative reactions, but I myself couldn’t care. In any case, the music we would make would be unique and come from the heart, and we would make music we would like to listen to ourselves.

Anyway, I watched The Silence of the Lambs movie one night and an important part of that film is a butterfly with skull, death’s-head hawkmoth. And somehow, I got the idea! The skull describes our heavy style music, and then the word “space” comes from the fact that we use a lot of synthesizers and 70’s style keyboard sounds and sequencers. And I also wanted to add the word “allusion”, because allusion means an expression designed to call something to mind without mentioning it explicitly, like an indirect or passing reference. This mainly means our lyrics.

One might think that the songs only tells about some neutron stars and the Devil but these things are just some kind of allusion to reality. On The Counterbalance album, I tell a lot about my personal things, but always through metaphors. This also allows the listener to reflect on the message of the lyrics.

So, I had the words “death’s-head”, “space” and “allusion”. All of these described the band’s music. Of course, you can say DHATSA. It can be easier for everyone!

MS: Let’s discuss what’s on your playlist; can you give me a rundown on what you’re listening to at the moment?

Talala: Oh yeah, great! Now I have had a lot of time listening and getting to know several bands. But hardly any heavy music has been played on my playlist. I get to listen heavy stuff just enough when I compose music and play with our band.